I saw up some go-bars from a kite making fibreglass rods which I got from GoodWinds.
I also got some carbon fibre rods from them for reinforcing the neck.
The rods came in a 4' length and so I saw them up into 2' length and install the caps.
But the caps were abit loose so I attach some tape to the ends to make it more fitting.
Now I just need to find a container to hold them... 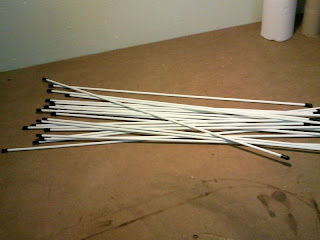 Tuning up my handplane.

I took some time to tune my #4.
I took out my #4 and flatten the base with a 100 grit sandpaper.
Took my 3 pieces of sandpaper a few hours of sanding and it's still not quite flat...
But after that I smoothen it using 1000 grit.

I also adjusted the frog, making the alignment more perpendicular.
The mouth was made closer too.

Think I need to get more rougher grit to level that animal.
Anyway it did manage to shave thin slices of pine wood.
I am thinking of an plane iron upgrade, probably aiming for LV plane iron or IBC plane iron

After the #4 I proceed to flatten the base of my Stanley block plane 9 1/2 normal angle.
This time round the base was flatter, but still not as flat as I like it to be.

Here is the pictures 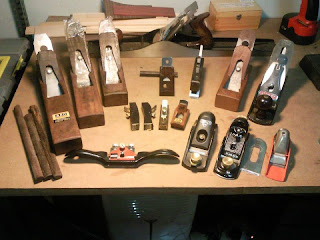 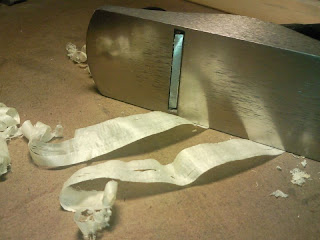 The #4's base you can see it's starting to shine. But it can certainly shave. 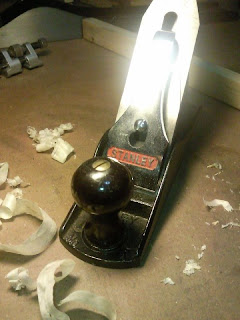 The Stanley #4 smoothing plane
After the tune-up I tried the plane on the neck.
Viola it work like a charm.
The Spanish Cedar was a soft wood so the it wasn't a real test on the iron.
But still it can cut very thinly. 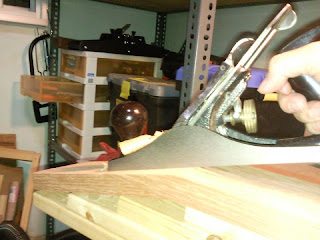 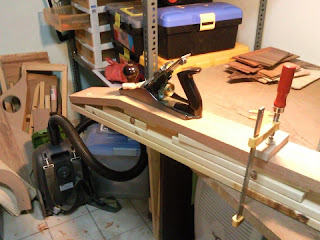 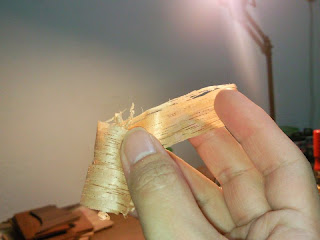 Light can pass thru'
Posted by Sen Goh at 09:56 No comments:

Thickness Measurement Tool
I started to make a frame for the electronic thickness dial gauge which I bought from Rockler.
At first I was thinking of sawing a U-frame out of a plywood but I noticed I had quite a lot of excess pine blank which I can use.
So I decide to make a frame out of the scrap pieces of pine that I had.
But after gluing up I noticed it wasn't as rigid as it should, so I added an aluminium piece to strengthen the structure.
Well the Al piece did work.
After adding the Al piece, the throat is about 30 cm.

The bottom nut is done.
I simply mark where the dial gauge needle would be and drill a 6mm hole.
Enlarge the bottom side to accommodate the T-nut.
But I didn't manage to knock the T-nut all the way in.
After screwing in the bolt, I also file the top of the bolt flat and rounded at the edges and smoothen with sandpaper. 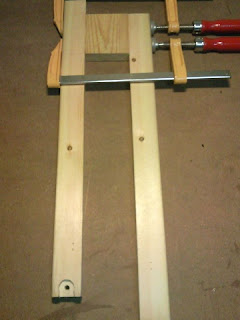 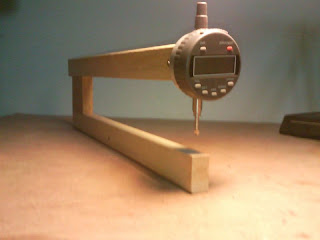 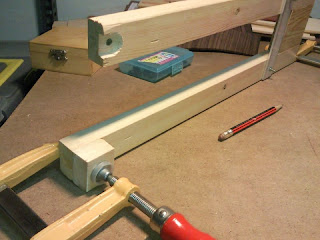 Gluing the end piece for the extension to touch the needle 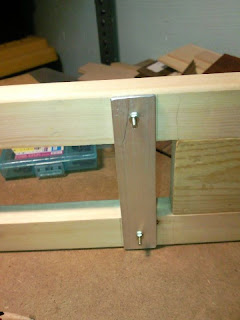 Aluminium piece to strengthen the rigidity of the frame. 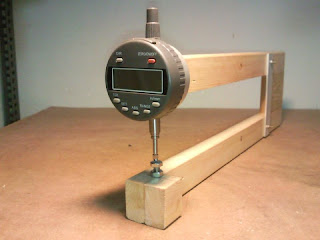 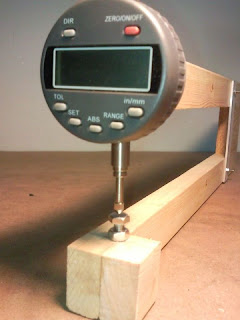 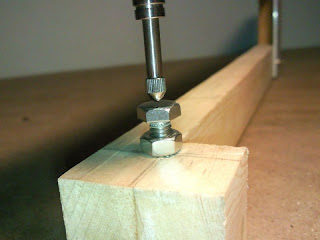 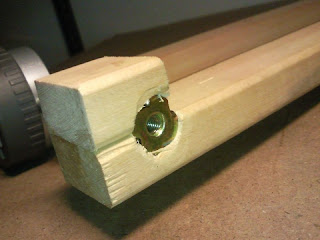 Beneath is a T-nut. On top is a normal nut to lock the height. 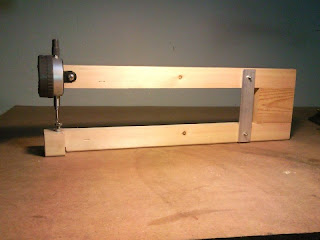 Readjusting the neck angle and relief of Guitar #1
My guitar #1's geometry wasn't good at all.
Due to the too forward neck angle, the action at the treble side becomes too high.
Also the relief at the bass side is too straight for at the 2nd fret region.
So I decide to remove the frets and plane away some finger board at the head end to correct the angle.

At first removing the fret seems really daunting.
But I muster the courage and try on the 1st fret.
Surprisingly the fret comes off pretty easily.
Unfortunately it also chips at the tang area.
But luckily I am going to remove some fingerboard so the chip part will be removed.
After planing, scraping sanding, I visually check the curve and adjusting until I think it looks right.

Then I also plane more curvature at the 2nd fret region to correct the relief for the bass side.
After that I knock back the frets and try. Voila!
The bass finally doesn't buzz.
But I did create some buzz at the 5th string around the 4th fret region.
Then I think it due to the nut should be easily fixed.
Overall now I am more confident to doing a re-fret job. 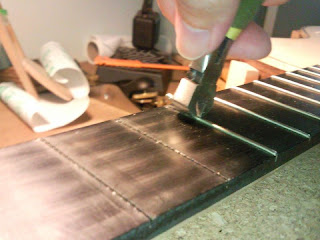 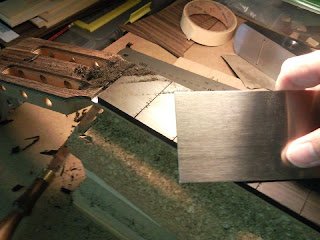 Scraping to smoothen the surface after planing
I also did something to the solera please read the solera post.
Posted by Sen Goh at 10:31 3 comments: