Modifying the Side Mould


20150223
I am constantly reviewing my building process actually.
Now I am modifying my existing side mould to include an neck extension.
Also I will include a block at the end and some locking mechanism so that the 2 side mould can be hold together.
This will hold the sides assembly together and able to detached from the main solera.

Also I might be planing to increase the height of the side mould a bit and maybe duplicate another side mould for holding another sets of sides together.
Any I'll see how much time to sidetrack to do this. 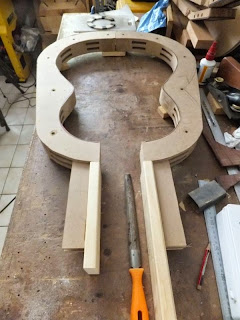 Checking out how much extension to do a the neck / heel side.
For Spanish slotted heel, the side mould will need to have an opening space for the heel part. 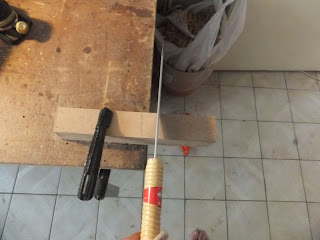 Saw the pieces to length. 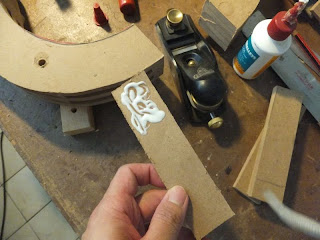 Glue the pieces to the side mould 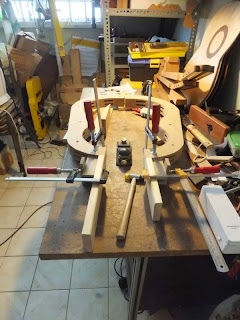 20150312
Some more progress for me.
I cut and glue the enforcement strips and wood together
After that I probably drill in some drywall screws to reinforce them 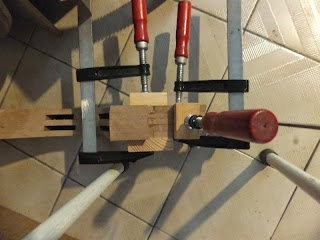 Glue the sections together 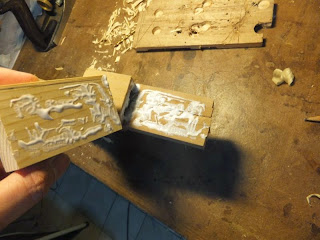 Glue the side with pine. 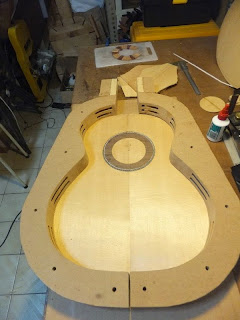 20150529
I added the block of wood between the two mould at the head part.
I didn't explicitly measure the thickness, I just add and subtract from my pile of scrap wood until the 2 mould fits.
After that I size the block of wood up accordingly.
I double check the size with my 1/2 template.
It fits nicely. 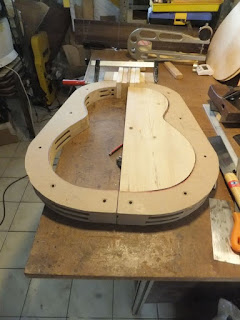 checked the size of the required block of wood between the 2 mould and double check with the plantilla template. 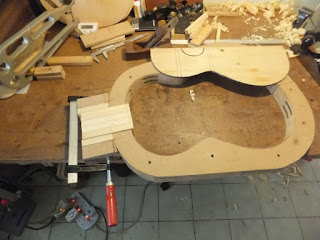 Now all sized up and ready to drill hole and then glue up. I need to trace the shape of the top curve also.

20150605
I saw away a section of near the centre of the side mould.
This is to give a perpendicular surface for the clamps to hold the sides to the mould.
In the past, the unparallel surface of the inner and outer perimeter of the side mould always cause me problem when clamping the sides for the section just before and after the waste.
After tracing the inner perimeter to the outer, I saw away the excess.
Now it is much easier to deploy the clamps.

After that I work on the front extension part.
Instead of the solid block I decide to make it using 2 piece of wood (top and bottom) with some inner filling.
No particular reason why.

I also thought of extending the height of the side mould by adding more pine pieces in sections
But I have not really decide to go ahead or not.
This will reinforce the neck extension section of the side mould.
But if the side mould is too high, then I would not be able to clamp the lining easily. 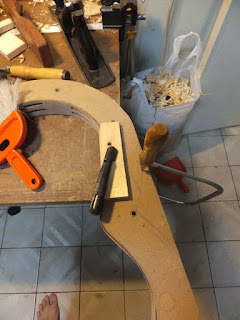 Saw away a section near the waist to give a perpendicular clamping surface for the clamps to hold the sides to the mould. 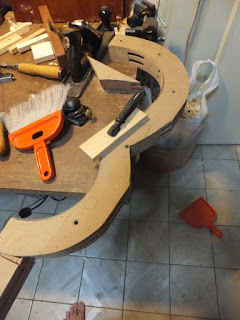 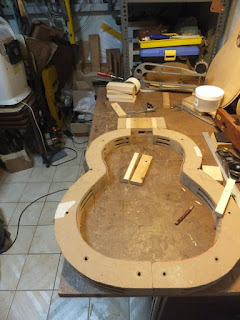 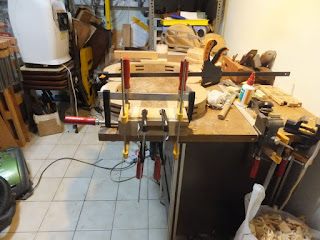 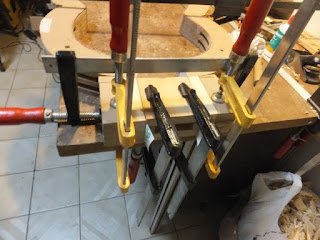 20150616
I glue in the end blocks to hold the ends together.
I drill 3 dowels to reinforce the blocks.
Hopefully they will be strong enough.
Now I think the mould is all set to be used.
But I am still pondering to add in 2 more layers on top and below or not. 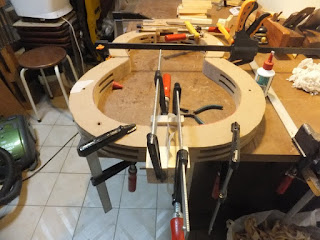 Glue in the end blocks reinforced by 3 dowels. 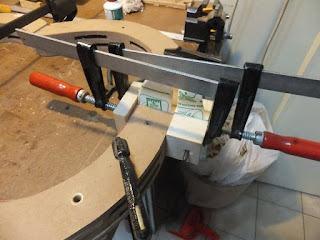 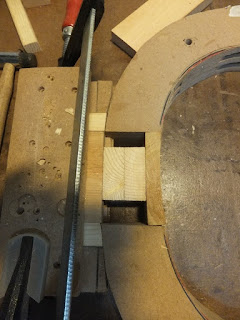 Also prepared a stopper detachable block in front. When the heel block is there this can be removed.

20150620
I tested the side mould by securing it with bolts.
So far they work just nice!
The strength seemed OK so I will be reinforcing them later.
Also I made some center press blocks for pushing the sides against the mould from the center using some extender. 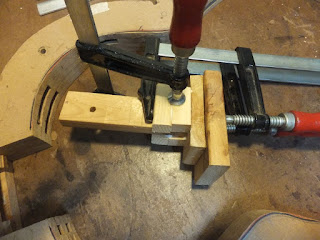 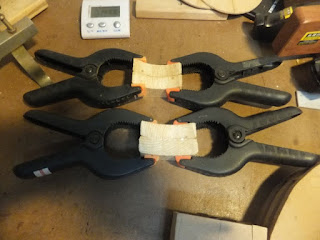 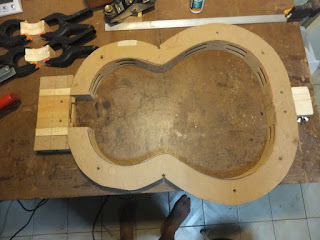 The completed side mould.

20150627
The side mould is done.
I made the lower bout spreader blocks too.
Then I drilled holes into the spreader waist blocks and made some slots into the lower bout blocks.
After that I applied the hardware and they work as expected.
Only thing is the pressure seem to force on the end joint hold and spread it further causing a slight gap.
Seems like I have to reinforce the end joint portion. 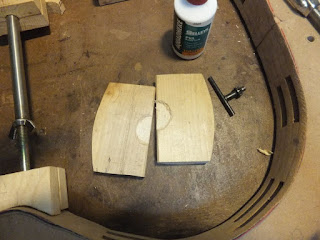 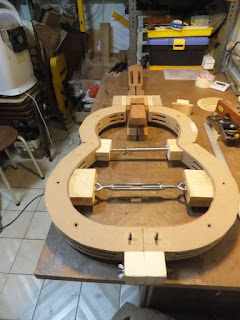