Anyway enough of the crap, back to the session.
For this session, I managed to try both methods of the cutting the binding rebate:
- Using the trimmer
- Using purfling cutter and chisel

As the top was relatively flat at the edges, I decide not to built the trimmer jig.
The profile of the trimmer based wasn't too big.
The deciding factor was that it is simply taking too long a time to build the jig.
Often in guitar making it's always a dilemma in deciding to build jigs or just simply work on it.
Perhaps when I am at my #3 or so the jig(s) will come in handy.
For this case, I wanted to see some progress after lagging behind for so long, and so I simply use the trimer as it is.
But this time round I had some vanguard sheet to make sure the dust generated is sprewn onto the ground instead of all over the place. 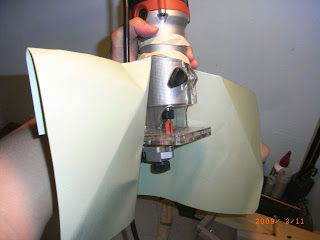 The vanguard to make the dust dropped down instead of flying all over.

With the vaccum cleaner, the cleaning up process was much easier.

At first when I cut the binding rebate, the top sides were frayed... (forgot to get some pictures).
From what I read at OLF, this was due to the bit.
A down-spiral router bit would prevent such a problem.
Another way is to scribe the line first before the routing process.
And so for the 2nd side, I use the purfling cutter to scribe the top first before I use the trimmer.
The end result was much better.
Anyway the frayed sides were removed when I cut the top purfling rebate.

Here are some pics of the top binding rebate. 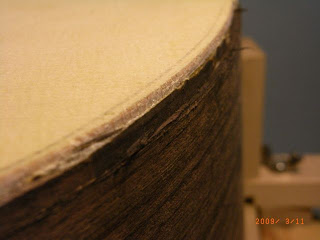 The only problem with the binding rebate was at the end near the heal region.
It is definitely high time to get a 2mm micro chisel.
In the end I had to use Xacto blade to cut and remove the excesss.
And it doesn't look pretty.