20171226
After the box is almost done, I began to prepare the back by thicknessing the back with planes.
I tried to use the scrub plane but it is causing heavy tear outs in the back.
So I had to use smoothing plane and cut at a thin shavings setting.
Man, it's really a workout...
After sometime the back sure looks great; with a golden flame. 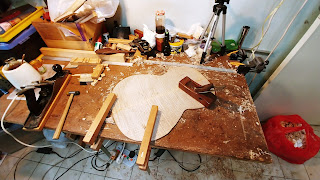 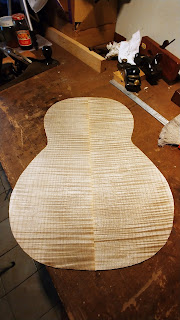 Maple back with a golden flame. Beautiful.

20180208
I began to brace up the lower bout of the back after the thicknessing.
finding the right location is always a challenge when gluing the back.
Some makers notched the back after gluing on all the 3 braces but for me, as I did not use the radius dish, my back doming was done with the brace in brace in the rim.
Thus, that method did not work too well for me.

This round I had to glue 2 brace onto the rim itself and glue the lower bout brace on the back instead.
This is to enable me to tune the active back with the lower bout back brace on.
The mid and upper bout are mainly for structural support.
Anyway that was done and I also glued in the angle braces
After that I shape those braces and glued in the seam support.
I choose IRW cut off as Maple is a light wood so it looks nice and in terms of weight it has some leeway to go.
I still need to cut some more seam support for the back but now it kind of look pretty nice. 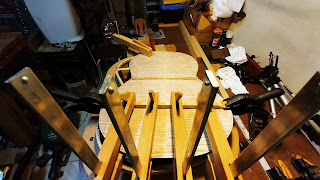 Gluing the back brace 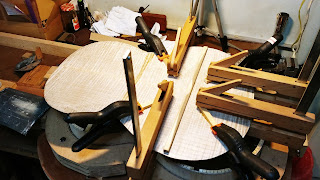 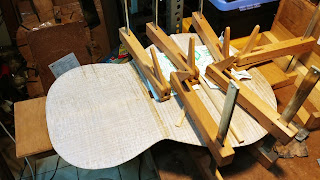 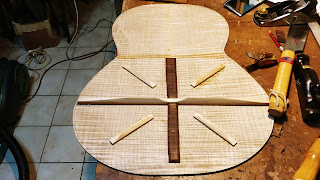