20151105
I was not satisfied with my #1's fingerboard.
The relief is too excessive: even though the action may be 3 and 3.5mm, the upper frets is still quite hard to play.
So this day while pondering over how to install the continuing lining with the side braces for my #9, I redo the fingerboard for my #1 instead.

The frets were all removed, I was quite amazed how shoddy the fret work was then.
Well can't be help as I didn't have the tools to file away a bit of the fret ends then.
So this time round I made it right.
The fret barber remover by Stewmac was really a great purchase, not only the fret barbs was remove easily, I can use to correct the shape of the frets after removal.
Thus the frets can be reuse easily after removal (since there is no much wear and tear).
After the fret were removed, I began to shave off the fingerboard at the nut end to correct the excessive curvature (relief). I use my high angle plane which plane the ebony easily and without any tear out.
I constantly check for the straightness of the fingerboard.
After all is levelled, I sand the fingerboard up to 320 grit.

Then the process of fretting begins which is quite tedious as I need to file the file ends, thin down the studs.
Finally when I all is done I check the string height at bridge region which is within 10mm to 12mm (the optimal height for classical guitar)
When I strung up, the guitar plays wonderfully! Nice!


Someone brought in a guitar for me for repair too.
The top has a crack developed at the end lower bout's right wing.
However upon putting my hands in to check the crack, I realised it's has been repaired.
There were 3 diamond cleats glued at the place where the cracks developed.
So the maker might have know something...
Anyway since there is no need to glue in any cleats, I help him to make another saddle for a slightly higher action.


20151117
Some updates on this guitar.
The maker has replied saying he reinforce the region beforehand as it look weak.
Well that's a legitimate reason.

After this guitar 2 more people has brought the guitar for me to repair.
First one was just a simple set-up (lowering of the saddle) and the other was having a buzz problem.
The first guitar was a Estudio Ramirez.
Not only the saddle was with high action, but the slot of the saddle was actually curved.
So I use my 2 mm chisel to flatten the base of the saddle slot at the bridge.
This guy was complaining to me about another luthier which didn't do a good job for him regarding this saddle.
Well I don't really know what was happening then so I refrain from commenting too much.
I duplicated the saddle but with 1 mm lower.
The action was spot on

For the 2nd guitar, I located the buzz to be a fret problem (too high).
Since the fret was seated properly, I had to file it down and re-crown it.
After that the buzz was gone.
Initially he though the buzz was caused by a loose brace.
My examination did not seem to suggest so as there was no wood rattling sound, more of a metallic rattle which would suggest the string hitting the fret.
After checking the fret 3 by 3, I found a particular fret was higher than the surrounding frets.
So I proceed to lower it accordingly.
After the repair I gave all the fret a steel wool polish to restore the shine.
Sorry no pics to show anything. 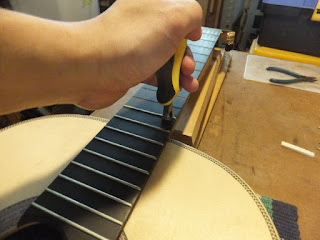 Pulling out the frets 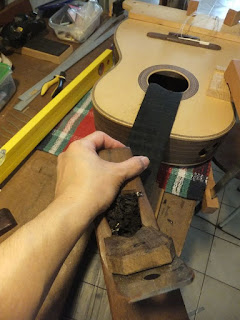 Planing the fingerboard at the nut end 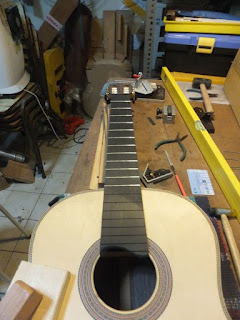 Installing back the frets 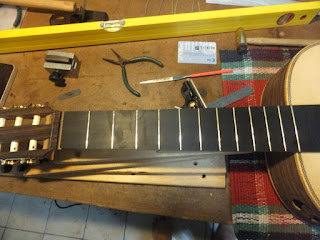 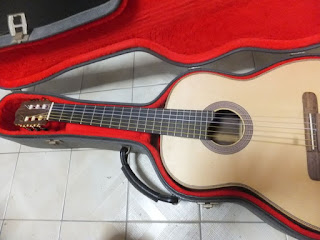 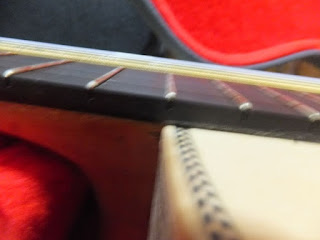 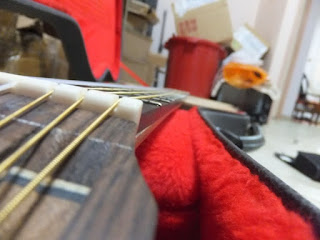 Now the relief is just nice! 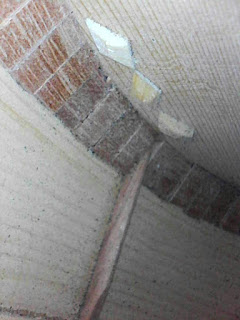 The guitar which was already cleated. 3 diamond where the crack was.
This means someone in the original workshop must have known that the crack was already there and repair it.
IMO I can safely rule out the owner's fault nor due to shipper's mishandling (unless the shipper knows how to repair guitar haha)
Anyway I won't say who's the maker, since I do not know exactly the entire process of what's happening so it's unfair for me to comment further.