Shaping neck and Fretting the fingerboard


20160506
I also clean up the neck by thinning the neck profile and sawing away the 2 side excess.
As the neck blank is pretty thick I still have a long way to go.
I also need to clean up the back of the head. 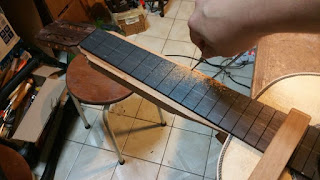 Sawing the excess neck by the sides 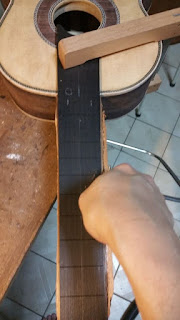 Sawing the other side 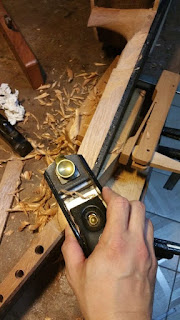 Cleaning the edges until it is flushed with the fingerboard 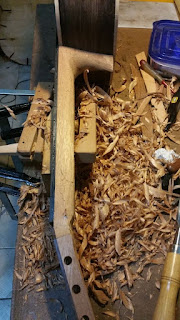 20160512
I sanded straight the fingerboard and began to fret the fingerboard.
The steps are like my previous builds.
Straighten the fingerboard, Reduce the fret barb size, Cut the frets to length, trim the end fret tangs. Round the ends and install the frets.
But my progress is slow so I only manage to install 3 frets only. 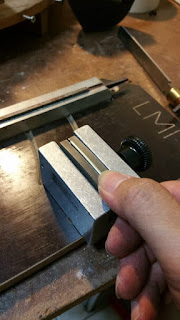 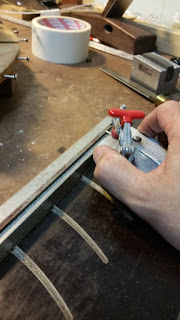 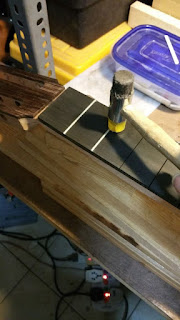 20160513
I fretted until 12th fret and then string up to try the guitar.
The sound seems to get better than last time I tried (cant really be sure though mainly just a feeling.)
I did notice some buzz so I remove the fret and level that part of the fret board.
One thing I noticed is that it seems pretty easy to play the guitar.
Think this will be a winner. 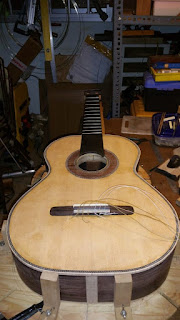 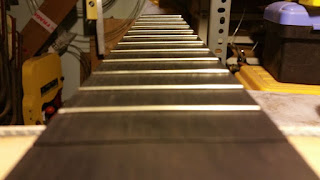 20160606
Just an update, I fretted the fingerboard to 12th fret and tried the guitar.
While the guitar sounds great, the fret work isn't.
There was buzzing at 4th 5th fret for the bass strings.
Visually I check the straightness of the fingerboard; it was straight.
Not sure where the problem is.
So I ordered a straight edge for checking and now waiting for the tool to come.


20160701
The straight edge came and I check the fretboard against the straight edge.
Indeed I was quite right the fingerboard was more or less straight.
So I proceed to fret and tried the guitar.
Still it was buzzing almost every fret.
Then I noticed the action was pretty low so I remake a saddle with higher action and viola... no more buzzing.
The action was now 3.5mm (T) and 4 on (B) and I can lower them a bit more.
Previous action was more like 2.5 / 3 ... no wonder it buzz like mad...
Anyway I finished up the fret to 18th fret and now it plays nicely.
Now to finish up the instrument and get ready for finishing...
What's left is to adjust the neck thickness and heel cap. 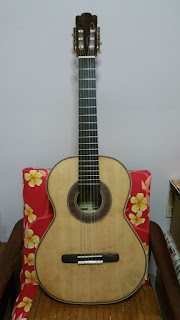 
20160705
After solving the string problem, I began to reshape the neck.
I just use the spokeshave and the sandpaper. 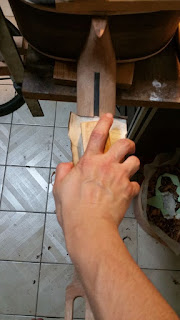 Sanding the neck straight after removing the bulging area by spokeshave 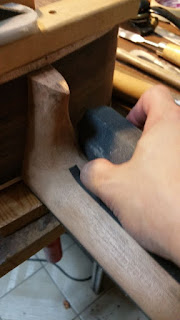 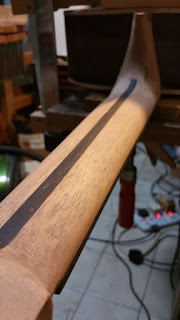 The texture feels nice after sanding.

20160708
Before I start the finishing, I need to touch up some remaining parts.
So I glue cut the heel cap and glue it onto the heel.
The heel cap is made from the bridge cut-off and smell really nice when I sand it.
It is slightly over-sized and will trim it once I glue it on.
(On hindsight, I should make it correct size and trim the heel instead (easier to carve).
But if glued out of position, I won't have much to play around with. (So a locating pin will solve that). 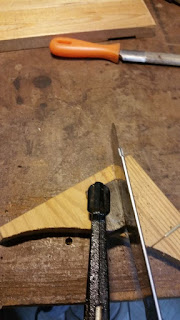 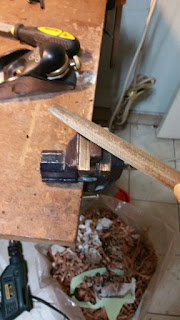 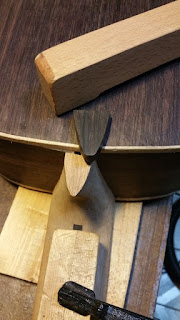 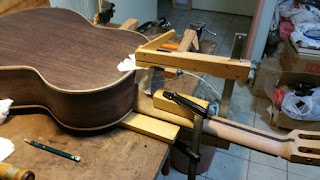 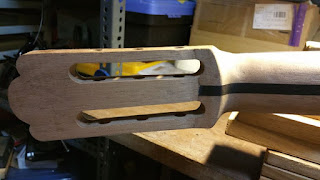 Shaped the back of the neck 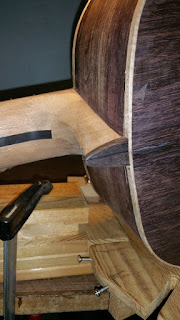 Shape the heel and heel cap

20160805
I cut the string clearance slot at the head and sanded the headplate and top.
This time round I did some design with the slot instead of a straight cut.
I also rounded the edges for the head.
I like a curve round edge look actually, though a straight cut usually will emphasize worksmanship usually... 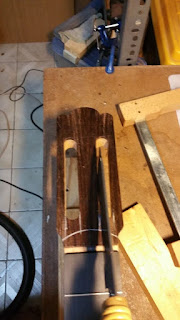 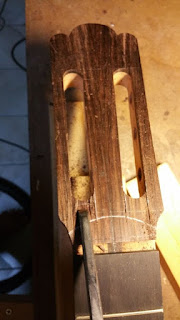 Chisel away the part for string clearance 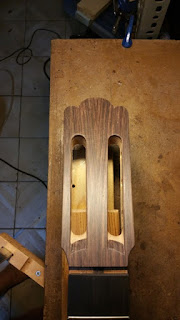