Making the nut and saddle


20130722
I didn't actually took many pic for this process.
The steps are quite simple: select an blank which is oversize a little and sand to fit the slot.
Once it's fitted, then I file the nut slots.
I use an 1/2 pencil to mark the height of the frets projection on the nut.
This is the lowest point the nut can go.
Similarly I put a 3mm spacer on 12th fret (4mm on bass side) and mark the projection onto the saddle using a straight edge.
After lowering and checking the action, I smoothen the nut and saddle.
I didn't do much intonation adjust 1st because my strings has not arrived.
I threw away my pack of strings... 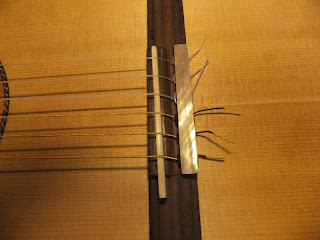 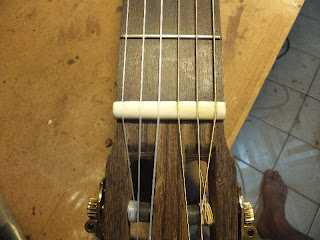 
When my strings arrived (ordered from stringsbymail.com), I began the process to adjust the intonation.
I use the method taught by my friend Alex.
I first tune the strings using the 2nd fret.
Then I check 14th fret's tuning and adjust the saddle to fit.
This ensures the 2nd to 14th fret are all in tune.
Then I adjust the but to make the open 12th fret harmonic to fit the 12th fretted note.
But I was surprise I didn't need much work on the saddle and nut.
My saddle was slanted at an angle and this compensates for most of the strings.
My nut was moved forward by nearly 1 mm

The strings I used are Aquila nylgut trebles and Hannabach 825 MT pure gold bass strings.
I love this combination: the treble sparkled but yet not too overly bright.
The bass is dark and powerful.

I actually strung up the instrument before I make and glue the heel cap.
I'll describe the sound in the next post though.
The heel cap was made from the fretboard (IRW) cut-off.
I was pondering to use my ebony cut-off or stick to using the same fretboard (IRW).
In the end I think using back the same fingerboard will look better and so it shall be.
After marking the shape, I began to saw off the excess and finally plane almost to shaped.
Once glued I will file to fit the heel. 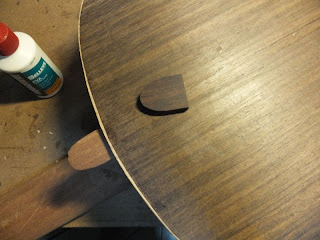 Preparing to glue the heel cap. 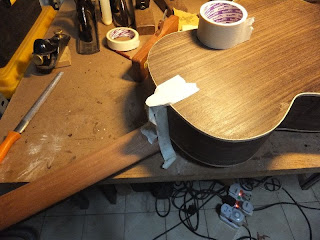 
20130702
I began to fret the guitar.
At first I wanted to listen to the open strings, but I can't seem to find my box of strings.
Now to recall I might have threw the box away by mistake. Argh!!!!!
For fretting, I first level the fretboard making sure it's flat.
Then I check the slot making sure it's deep enough for the tangs.
I did this by filing away the protruding studs on the fret tang and use that to check each slot.
Finally I began to fret.

I don't have a nipper so I had to file the tang away at the ends.
It's a hard job but I am going slowly.
(I ordered some new strings so the pace is just nice for the strings to arrive)
I also file a bit of the fret tang studs away to make it easier to hammer the fret in.
Before hammering, I file the slot with a triangular file to make it less prone to chipping in case a fret jumps out during hammering.
And it did, one fret jumped when I was hammering it in and no chips at all :)
So far I only covered 5 frets and a lot more to go. 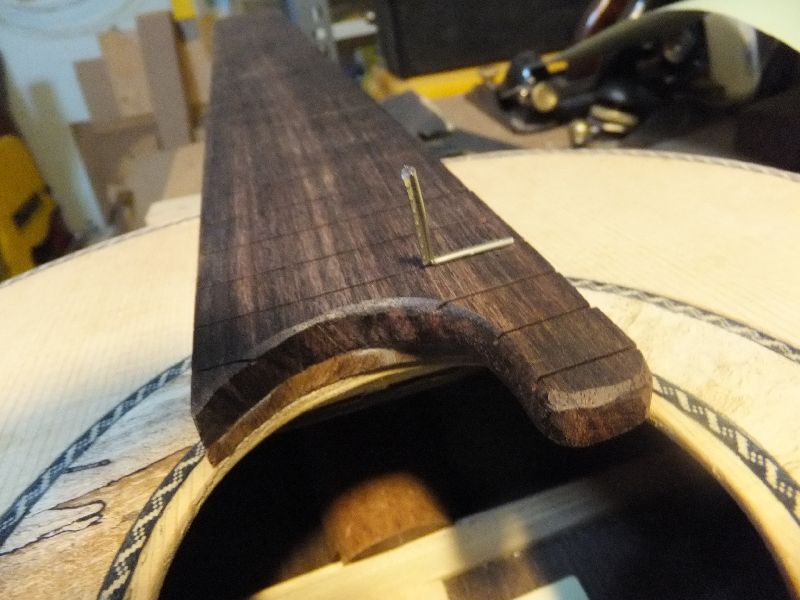 Checking whether the fret slot depth is deep enough 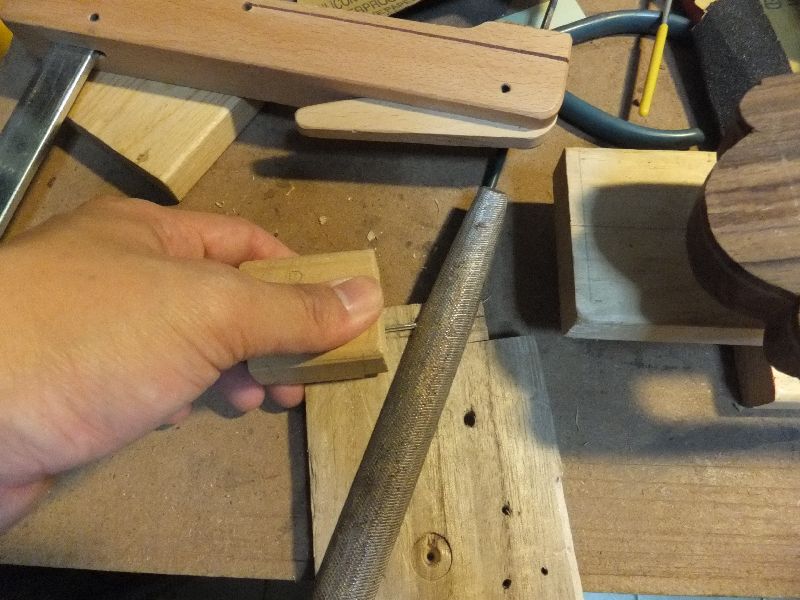 Filing away the fret tangs at the end 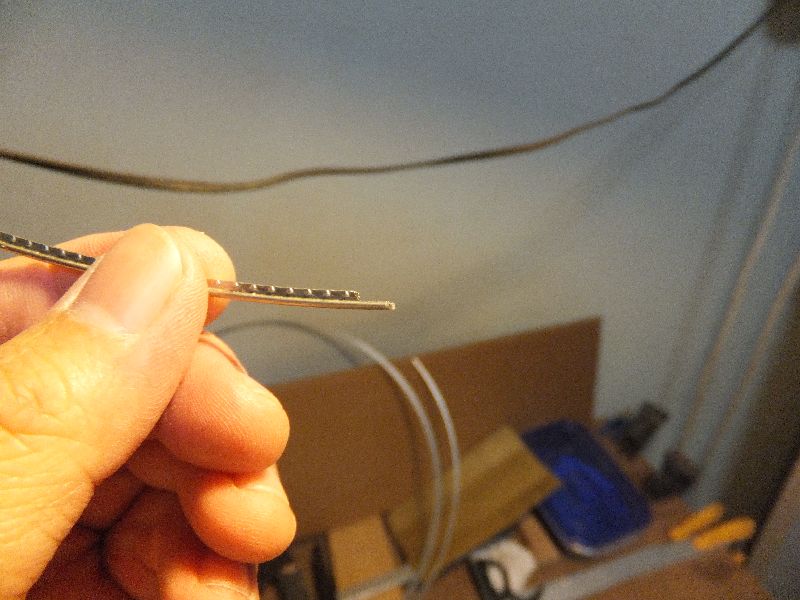 The result is quite nice but lots of hard work 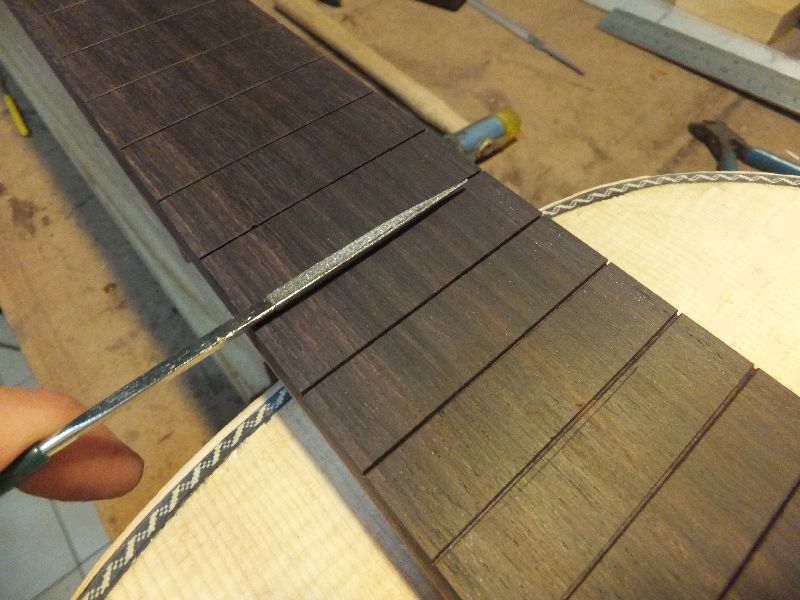 Filing the slot with a triangular file to prevent chipping 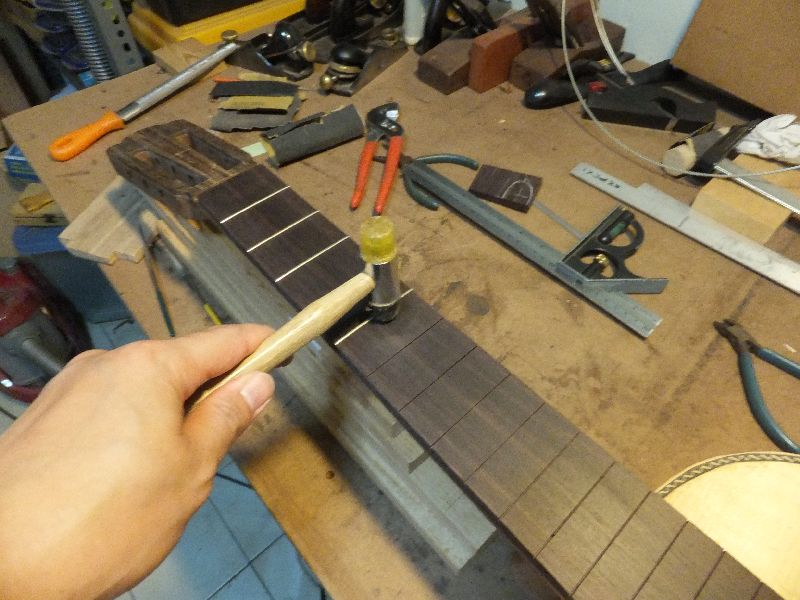 And the fretting begins

20130711
I have finished fretting all the frets but I have yet to find my box of strings.
I filed the fret ends and rounded the ends like what I did for the other 2 guitar. I think I have thrown it away... Sigh.
Anyway I bought some unknown brand of strings to string it up while my shipment of new strings is still in transit.
The guitar didn't really sound as what I expected.
My #1 sounded more refined.
Think I'll for the strings to come before I make any conclusion.
Anway I have yet to adjust for the intonation until the new set of strings arrives. 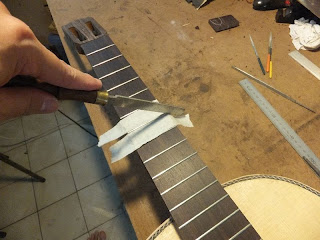 Round the ends of the fret 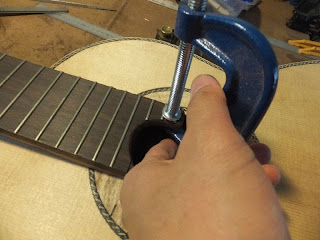 Clamp in the last few frets. For those in the body I use clamp instead of hammering 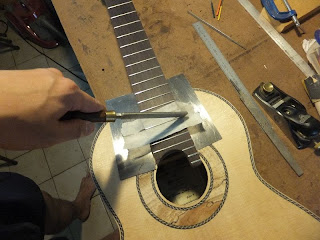 When it's in the body, I use 2 scraper to protect the top 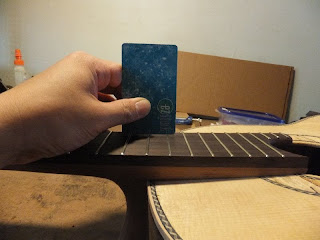 Check for fret levelness; 3 fret at a time.