Installing the binding and purfling


20180622
Next I cut the binding channel on the back of the guitar.
Normally I will cut the top binding channels first for but this time round I cut the back bindings
Also I bent the bindings.
I thought ebony was hard to bend but they came out pretty good.
Think overall my method had improved as I use another iron to heat the other side of the wood.
That really helps in the bending.

I describe a bit about my new method of bending.
Actually there isn't much difference from my previous method.
Previously I will use 2 blocks to support the back of the curve portion during the bend.
However the heat is only coming from the hot pipe side.
So this might result in some breakage for some woods that don't want to be bent.
With this method, the concept is very similar.
The bend at the curve part is now supported by the iron; but I can only support one side instead of two.
I need the other hand to hold the bindings.
The good part is the iron will also apply the heat to the back of the wood which greatly reduce the breakage.
Also by pulling the wood thru the compressing heat mold formed by the pipe and the iron, the wood acquires a gradual bend shape.
This will also reduce the amount of sanding required for the woods after bending.

After cutting the channel, I fit the binding and they fit perfectly.
I did some adjustment to the trimmer to cater for the arch back surface.
Thus the channel came out referenced the sides instead of the top. 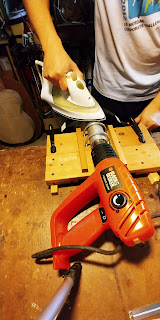 Bending the bindings using a hot pipe and an iron. Works great! 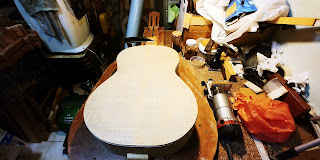 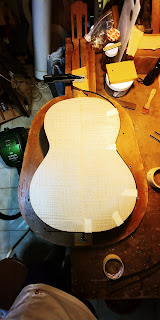 Repair a guitar with bridge problem


20180417
a guitar came into my workshop for a bridge repair.
This is not the usually bridge lifting off problem, but the tie-block has came off.
Naturally I was surprised as this is the first time I have seen such a problem.
Anyway I thought the fix will be simple: to glue back the tie block
There owner wanted to change the whole bridge but I digressed.
Hence I stick to my plan to glue back the tie-block
After gluing I strung up the guitar 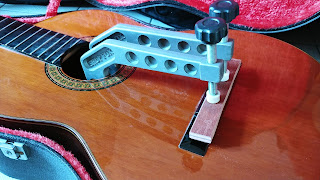 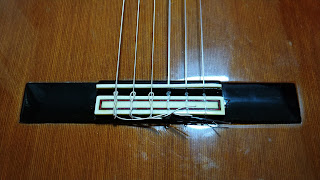 20140424
Unfortunately, after a few days, the tie-block came out again to my surprise.
True enough the glued joint is stronger than the wood itself, but the break as another layer in the tie-block
What this means was that the bridge wood has some sort of weakness in it.
So the solution now is to change bridge entire and build a new bridge. 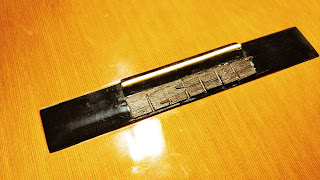 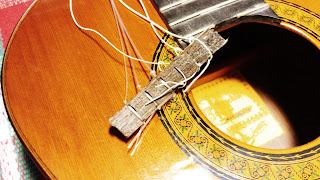 Still with the strings attached

20180507
I began to remove the existing bridge.
Before that I scribed the edges to prevent the lacquer from chipping off as I remove the bridge.
I also took measurements of the scale length / compensation and bridge height.
To my surprise, the bridge began to crumble and broken in pieces as I remove it.
I followed my usual way of removing the bridge heating the platter knife and insert in between the bridge and top.
No heat was apply to the top
This was to ensure no excessive heat was applied to prevent other glued parts from coming loose from the heat
So the problem was with the bridge wood after all.
But I wonder what caused the wood to crumbled like that.

Finally after 45 minutes or so I manage to remove the bridge cleaning.
Surrounding woods are undamaged. 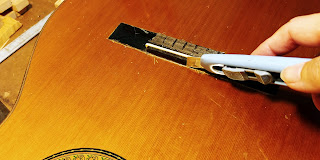 Scribing the edges to prevent lacquer chipped out 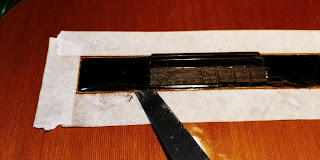 Heating and inserting the knife under the bridge. No heat was applied to the top. No water was used. 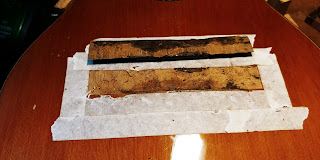 Then I saw away the bridge wings and the bridge began to form in shape. 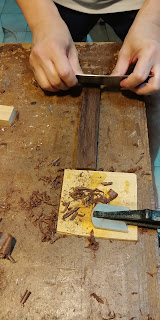 Scraping the bottom of the bridge blank 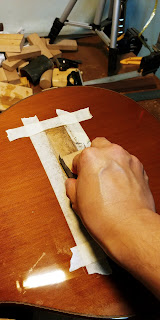 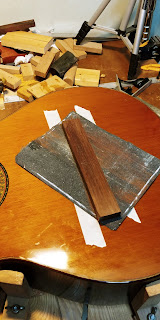 Sanding the bridge to fit the top 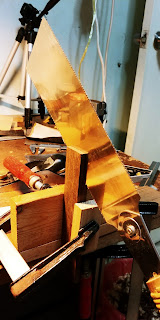 Saw away the wing of the blank 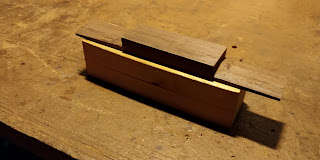 20180619
Half way I decide to use pre-made bridge as I can complete the process faster.
And the fit was quite good.
So I use epoxy to glue the bridge.
Not my usual habit to glue the top but in this case as there were some gaps in the surface, a epoxy glue will be a better guarantee.
So I fitted the bridge and applied the glue to both surface, followed by clamping. 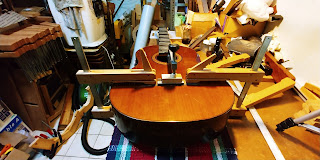 Next I removed the clamp and make a new saddle, change the tuning machine and string up the guitar.
The bridge glue job looks good.
And the guitar sounded nicely.
I touched up some of the finishes but they certainly don't look perfect though. 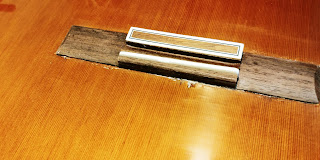 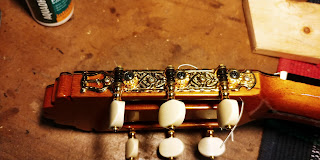