Til date, I have just started the guitar making process for 3 session.
Here are the details:

I bought some tools from Daiso at $2 each.
It is really a good place to get cheap and good tools.
(They do sell alot of other good stuff but that's another story...)
- F-clamps
- Chisels
- Scrap woods (bass wood)

I started the guitar making process by sawing the struts from the block of spruce.
Using coping saw to saw the spruce block is not an easy task; it is very easy to deviate from straight line.
So to cope with that, I deliberately increase the thickness of the marking for at least another 50% or so.
(It is bound to happen actually, so got to think of ways to recover from the mistake.)
This is to leave enough margin for mistakes.
E.g. I need 6 mm thickness I would marked the line at 1.5 cm or so.
The difference would be removed by planing.
At the end of the session I have sawn quite number of struts, but still a long way to go...

One of the important points to take note is that, after sawing the brace, ensure that the surface is flattened by planing it.
This has to be done before you start to saw the next brace from the spruce block.
If this is not done properly, you could end up with a crooked struts.
Unfortuately, some of the struts which I have sawn, exhibit this mistake...

Session 2
In order to alleviate some of the hand and back pains I experience while sawing the struts, I bought a electric Jig Saw.
I bought it at AMK NTUC Extra which cost about SGD40.
Unfortunately after trying to use it for sawing the struts, the result was not what I had expected and very unsatisfactory.
If you think using the coping saw was hard, using Jig Saw was even harder,
especially in controlling it to saw in a straight line.
As a result, regretably, I wasted quite a bit of the spruce block :(
(Luckily I ordered 2 more spruce block, knowing that I would make stupid mistake here and there.)

According to my more experienced friend EJ, who has dabbled quite a fair bit in this art of luthiery, in order to make the Jig Saw cut in a straight line properly, you need a fence guide.
I was thinking of making a mold or something to achieve that.
One of the way is to fix the Jig Saw on a mounting block and use it like a Band Saw.
If that is the case, the the fence guide would simply be another removeable plank hold in place using the F-clamps.
However, making the mount could take some time and effort and my little work bench wouldn't have enough space to hold the mount either.
You need a proper size workbench instead.


Session 3
I have just bought a new digital camera (Ricoh R6) to take some pictures of the guitar making process.
All the pictures shown was actually taken during this session.
I merely backdate it.

I bought some more new tools from Daiso:
- Japanese carpenter saw
- Mallet (for hammering in the frets)
- Clips for clipping the kerfing
- Some screws and nuts (for making the mounts)
- Cork sheets for protecting the wood surface during clamping. 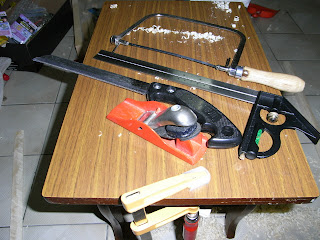 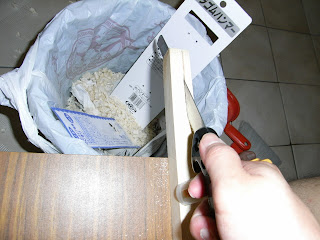 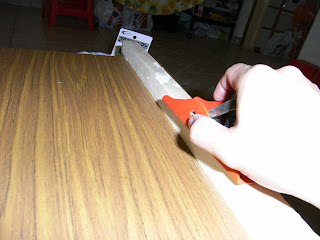 After sawing all the braces for the tops, I laid them out on the spruce top board.
Finally I can see the light after labouring for so long... 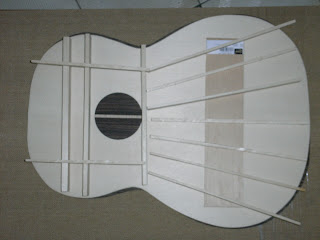 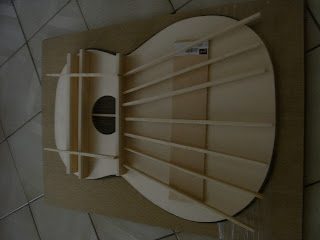 Explanation about the struts
The topboard is the most important part of the guitar
To support the string tension the topboard would have to be very thick.
However a thick top would not make a good sound and probably hardly any volume at all.
So in order to support a thin top (typically 2-3mm thick), struts of bracing have to be added to the top board to support the pull of the string.
The struts are laid in a pattern known as the fan struts; they fan out towards the lower part of the guitar.
It was developed by the Spanish Luthier Antonio de Torres.
Newer patterns include the modern lattice patterns which has a grid of cris cross struts


My luthier friend EJ commented that the brace was too thick, so I am going to trim them down further.
Probably I will let the height of the bracing remain at 5 - 6mm, higher than normal height (3 - 4 mm).
After I have strung the guitar up during the final phrase, then I will fine tune the brace height either through the sound hole or an access hole at the end block.

After playing guitar for 10 over years, I began to inquire into the making of guitars.
After reading about guitar making from several websites and bought a few books about guitar making, I have decide to try it out myself.
The books which I bought include:
- William Cumpiano - Guitarmaking: Tradition And Technology
- John S. Bogdanovich - Classical Guitar Making: A Modern Approach to Traditional Design
They can be found from Amazon


There is a good forum on Delcamp, where the luthiers shares their valuable experience.
I have learned alot from that forum and found another friend EJ in Singapore also interested in guitar building.
He is way more advanced than me in guitar making; on his way to finish his first master piece.
His guitar making process can be found at the following website:
Photo album 1
Photo album 2


By chance, I found the luthier supply website Luthiers Mercentile International (LMII).
I browsed through their catalogues of material and the good thing about them is that they have a kit set for guitar making at a discounted rate
What is even better is that, the kit set can be customised.
Finally after some customisation, I ordered the kit set from them.
Not only do they supply the raw materials, they also do some processing.
I also ordered some of the wood processing service offered by LMII, partly because I don't have the right equipment / tool to do the job (e.g. side bending) and I don't have the necessary experience.
These includes the more tedious processes like bending the side wood, inlaying the rosette and carving the neck etc...
Now all that is left to do, is to assemble the parts of the guitar.

(Shipping was about USD 80 to Singapore, which was affordable.
However do note that any Internet purchase above SGD200 is subjected to GST.
So if you want to get any kit set better get it before the GST hike in July.)


The package arrived in January.
Mine took slightly longer than usual because it was Christmas period when I confirmed the order for the package.
LMII's packaging is very meticulus; every thing is well-bubbled wrapped to protect the materials.
I must say their service is 1st class: polite and efficient; salute to them for their service


Here is some pictures of the packaging: 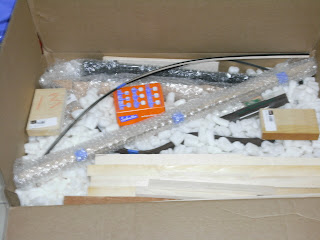 The complete materials. (Note that I have started to saw some struts)


Here is the close up of the Schaller tuner machine: 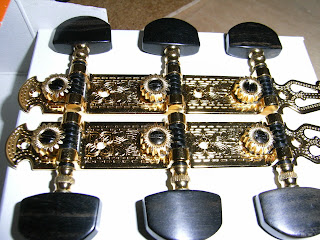 This is a lyre type of tuner machine.
I had originally wanted a Hauser type of tuner machine, but they were out of stock.
Not wanting to wait for the back order I chose this instead.
The main feature about this tuner, which I like, is the black ebony buttons.
They look nice eh?
Posted by Sen Goh at 00:33 1 comment: