I had to rest a while as my R wrist was painful.
Signs of rheumatism?
I had sprained my wrist during my company's inter-department soccer game when I fell down a number of times.
Not that I am good at soccer though.
Ever since that game my wrist wasn't in good condition.
These few days the weather was very wet and hence the rheumatism sets in.

I began to thickness the sides.
With my arsenal of planes and planing cross-grain, it quite easy to bring down to thickness 2mm without any tearout.
I use both my woodies and western planes 2 jack planes one smoother cut one more aggressive.
But i do realise it's time to sharpen all the irons... 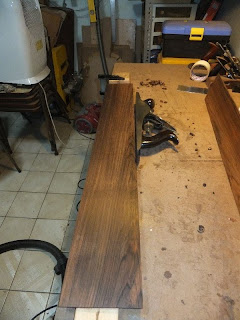 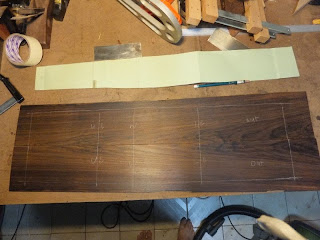 Mark out the side points from my template 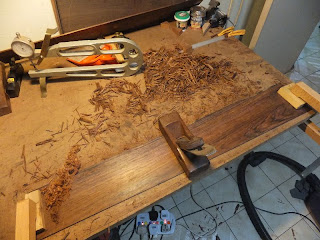 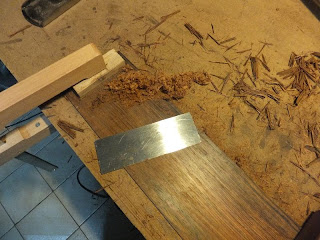 Smoothen it with scraper 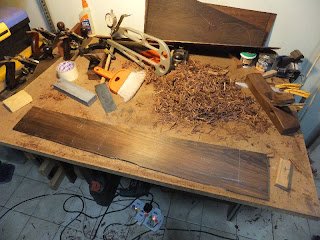 Look at the mountain of shavings 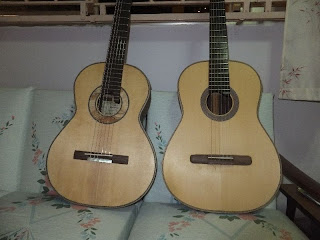 
Here is the sound clip after changing the strings.
I compared it with my #1.
I must say initially #3 sounded quite weak; but after intense playing by my friend (owner of my #2) the guitar opened up tremendously.
The bass were no longer shy the trebles projected very far.
But to the player #1 still sounded much better.
The upper notes were more even compared to my #1 but it doesn't have a really outstanding note.
My #1's B A and E notes is really outstanding compared to other notes.
This #3 all higher notes are very even.

Listen to the La Catedral clips and you will hear that in recording, the #3 sounded much open (airy).
Bass wise both are OK though not as outstanding as my WRC Gutmeier Fleta copy's bass.
In terms of volume after opening up #3 beat #1 flat.
I was quite surprised at the changes #3 underwent.

I brought the #1 and #3 to office for testing and my friend brought the #2.
We compared the 3 guitar and each had very different characteristics.
My friend played various pieces including Bach's Chaconne, Concierto de Aranjuez, Albeniz Granada, Asturias and some modern fingerstyle pieces.
Listening were done at about 10 - 15 m away.
String used are quite similar, #1 and #3 have identical strings Hannbach GoldBass 825 with Aqulia nylgut treble.
#2 has D'Adario bass (I think) with Aquila nylgut treble.

#2 is the loudest amongst the treble at that distance and has the brightest tone.
It's treble is especially prominent and penetrating.
Single line melody like Concierto de Aranjuez (Adagio) sounded the best.
When played with baroque, it can sound a bit unbalanced with the bass.

#3 has most even voicing between the bass and treble and bass and the darkest tone amongst the 3.
But at the distance it can sound pretty boring.
Baroque pieces sounded the best and surprisingly fingerstyle music sounded very good.
This is because all the in between rhythmic structure can be heard quite prominently without overpowering the melody.

It was an enjoyable evening. 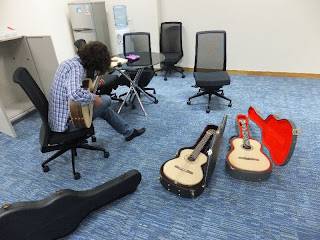 My friend Kong Meng trying out the guitars. He is very vesatile musician and an expert all genre of music and instruments including classical guitar, fingerstyle guitar, Jazz guitar, violin and even drums! 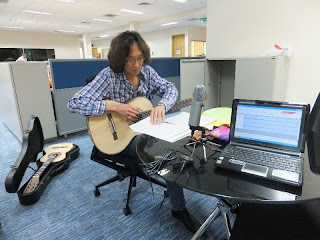 He is trying the Chaconne 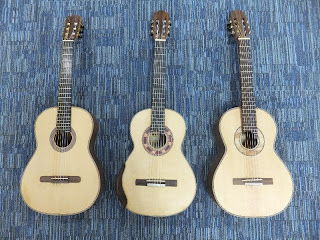 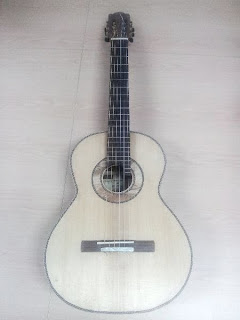 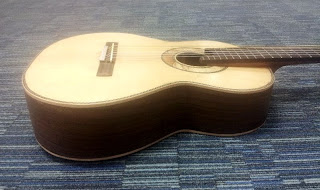 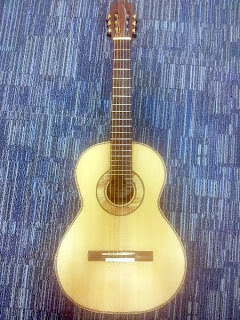 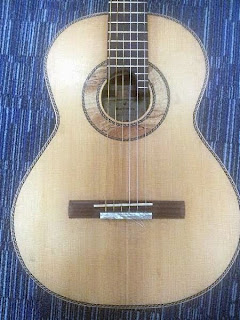 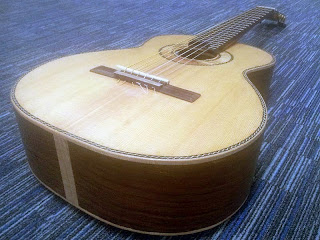 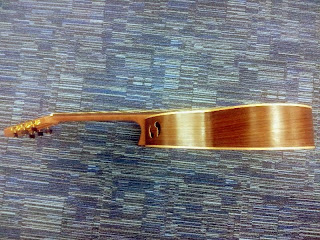 
20130802
I have decided to use polyurethane varnish for the guitar.
First I pore fill using the wood pore filler.
Then I sand it level.
For the PU varnish I use wipe on technique to apply the varnish.
After each coat, I sand with 240 grit to level it.
After 3 coats, I still can't get a good shine.
I think I have wait for to to cure properly and meanwhile read more about applying PU varnish.
I probably need a few more coats. 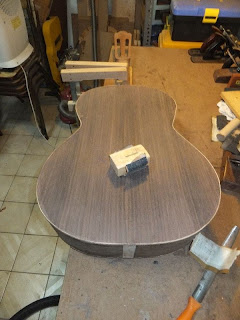 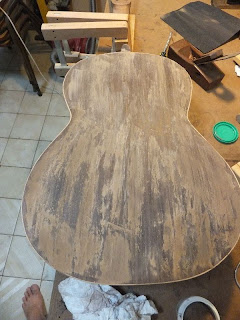 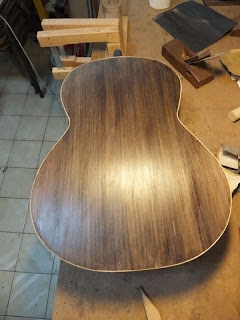 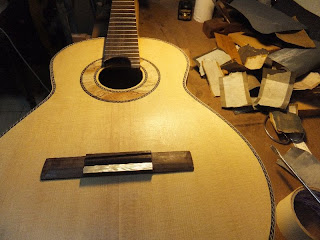 Finishing the top. The surface felt smooth but not quite the shiny yet. 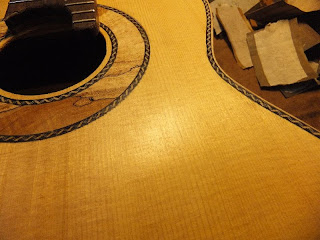 Close up of the finish 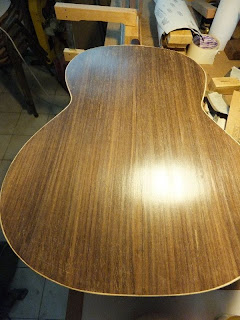 After 2 more coats and level sanded with 800 grit


20130802
I also jointed and glued the back.
After much pondering and selection by my friend this piece of CSARW was chosen because it looks the most stable.
It didn't react too much to the changing RH.
The other piece which was quite fragrant was warping badly.
After the glued had dried I scraped off the glue line and checked the joint (which was perfect). 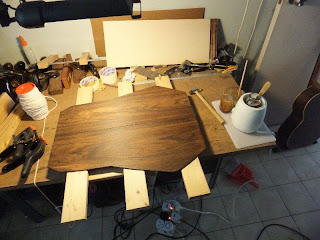 Preparing the joint the back 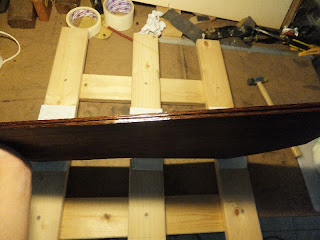 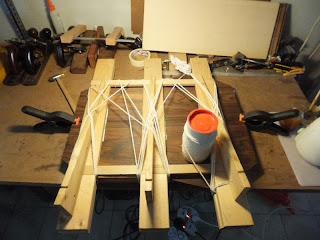 Applying the ropes to clamp the back joint 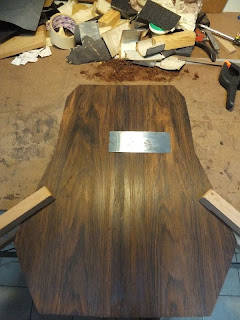 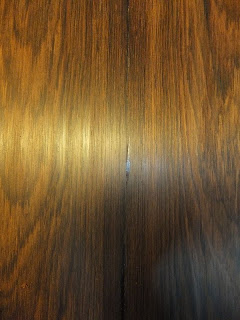 Close up of the joint